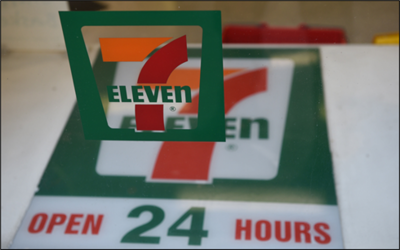 There are 176 7-Eleven stores in Denmark.  The company’s CEO told a Danish broadcaster that cash registers “suddenly” began to malfunction in stores.  “This has never happened before and we’re working hard to find out what exactly has happened,” he said.  “There is currently no time scale, so we are keeping all of our stores closed.  We will decide later what to do next,” he told the broadcaster around midday on Monday.[1]

All stores in the country are affected with some placing paper signs in their windows to inform customers of the closure, according to reports.[2]

7-Eleven, Inc., styled as 7 ELEVEn, is an American multinational chain of retail convenience stores, headquartered in Dallas, Texas USA.  The chain was founded in 1927 as an icehouse storefront in Dallas.  It was named Tote'm Stores between 1928 and 1946.  After 70% of the company was acquired by an affiliate Ito-Yokado (Japan) in 1991, it was reorganized as a wholly owned subsidiary of Seven & I Holdings.  7-Eleven operates, franchises, and licenses 78,029 stores in 19 countries and territories as of November 2021.[3]

As of 9 August, five stores are open again which are only receiving payments in cash or via a mobile phone application.[4]

Of interest and allegedly prompted by the US Speaker of the House visit to Taiwan, Taiwanese 7-Eleveln stores were attacked.  "We also saw cyber-attacks (in Taiwan) hit 7-Eleven.  We're still getting reports of what's going on, but a lot of these attacks were DDoS attacks, or distributed denial of service, which means hackers flood these sites with traffic so they simply can't function," said a cybersecurity expert.  "A lot of it took down operation, some of it in 7-Eleven showed messages supporting China.[5]  It looks like a lot of the IP addresses originated from Russia and China."  In some branches of 7-Eleven convenience stores in Taiwan, television screens behind cashiers displayed the words "Warmonger Pelosi, get out of Taiwan!"