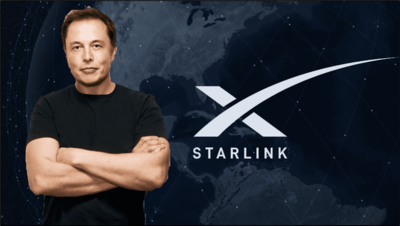 Elon Musk announced yesterday that his company SpaceX’s satellite broadband service, Starlink, has been activated in Ukraine, after the Internet was disrupted in the country due to Russia’s invasion.  “Starlink service is now active in Ukraine.  More terminals en route,” Musk wrote on Twitter in response to Ukrainian Vice Prime Minister Mykhailo Fedorov.

“[Elon Musk], while you try to colonize Mars—Russia try to occupy Ukraine! While your rockets successfully land from space—Russian rockets attack Ukrainian civil people!” Fedorov had written to the SpaceX billionaire.[1]

Internet monitors said on the 26th that connectivity in the southern and eastern parts of Ukraine were particularly affected by the Russian invasion.  Starlink is a space-based system that SpaceX has been building for years to bring high-speed broadband Internet to underserved areas of the world, such as rural or hard-to-serve places where fiber optic cables and cell towers do not reach.  It can also serve as a backup if natural disasters affect communication.

Starlink is the name of a satellite network developed by the private spaceflight company SpaceX to provide low-cost Internet to remote locations.  SpaceX eventually hopes to have as many as 42,000 satellites in this so called mega-constellation.  The size and scale of the project flusters astronomers, who fear that the bright, orbiting objects will interfere with observations of the universe, as well as spaceflight safety experts who now see Starlink as the number one source of collision hazard in Earth's orbit.  In addition to that, some scientists worry that the amount of metal that will be burning up in Earth's atmosphere as old satellites are deorbited, could trigger unpredictable changes to the planet's climate.[2]  SpaceX has almost 2,000 Starlink satellites orbiting the earth at an altitude of 340 miles (550 kilometers).  The company hopes to have 4,425 Starlink satellites in orbit by 2024.