FortiGuard Labs researchers have been tracking a quickly evolving IoT malware family known as “RapperBot” since mid-June 2022.  This family borrows heavily from the original Mirai source code, but what separates it from other IoT malware families is its built-in capability to brute force credentials and gain access to SSH servers instead of Telnet as implemented in Mirai.  In addition, recent samples show that its developers have started adding code to maintain persistence, which is rarely done in other Mirai variants.  This provides threat actors with continued access to infected devices via SSH even after the device is rebooted or the malware has been removed.  This shared report reveals how this threat infects and persists on a victim device, as well as interesting changes that make us question the real intention of the threat actors.[1]

Discovery:  In June 2022, researchers encountered IoT malware samples with SSH-related strings, something not often seen in other IoT threat campaigns.  What piqued our interest more was the size of the code referencing these strings in relation to the code used for DDoS attacks, which usually comprises most of the code in other variants.  Upon further analysis, they discovered that this malware family, titled "RapperBot,” is designed to function primarily as an SSH brute forcer with limited DDoS capabilities.  As is typical of most IoT malware, it targets ARM, MIPS, SPARC, and x86 architectures.  The name “RapperBot” comes from an early July report from CNCERT where an embedded URL to a YouTube rap music video was found in older samples.  The samples of RapperBot released after this report do not contain this URL.

Analysis: RapperBot heavily reuses parts of the Mirai source code, but its features and implementation details, e.g., the Command & Control (C2) command protocol, differs significantly from the original Mirai and typical Mirai-based variants monitored by FortiGuard Labs.  Unlike the majority of Mirai variants, which natively brute force Telnet servers using default or weak passwords, RapperBot exclusively scans and attempts to brute force SSH servers configured to accept password authentication.   The bulk of the malware code contains an implementation of an SSH 2.0 client that can connect and brute force any SSH server that supports Diffie-Hellmann key exchange with 768-bit or 2048-bit keys and data encryption using AES128-CTR.

A distinctive feature of the brute forcing implementation in RapperBot is the use of “SSH-2.0-HELLOWORLD” to identify itself to the target SSH server during the SSH Protocol Exchange phase.  The appearance of this RapperBot in mid-June coincides with the observation of this same client identification string by SANS Internet Storm Center in their honeypot logs.  Earlier samples had the brute-forcing credential list hardcoded into the binary.  From July onwards, samples now retrieve this list from another port on the C2 server.  This allows the threat actors to continually add new SSH credentials without having to update infected devices with new samples.  This port number ranges from 4343 to 4345 in the latest samples.  Once RapperBot successfully brute forces an SSH server, the valid credentials are reported to the C2 server on a separate port (currently 48109) without executing further commands on the remote victim.

In late June, however, FortiGuard Labs found some samples that attempted to self-propagate via a remote binary downloader post-compromise. The commands executed on the compromised SSH server are shown below.

For unknown reasons, this propagation functionality was removed in samples collected a few days later and has not been seen in subsequent samples.  As with the original Mirai, analysts suspect the threat actors have implemented a separate loader system that would subsequently connect to the victim to download and execute the bot client.

Since mid-July 2022, RapperBot has switched from self-propagation to maintaining remote access into the brute-forced SSH servers.  It runs a shell command to replace remote victims’ ~/.ssh/authorized_keys with one containing the threat actors’ SSH public key with the comment “helloworld,” as shown below.

Public keys stored in ~/.ssh/authorized_keys allow anyone with the corresponding private key to connect and authenticate to a SSH server without needing to supply a password.  This presents a threat to compromised SSH servers as threat actors can access them even after SSH credentials have been changed or SSH password authentication is disabled.  Moreover, since the file is replaced, all existing authorized keys are deleted, which prevents legitimate users from accessing the SSH server via public key authentication.

Apart from maintaining access to every SSH server that it brute forces, RapperBot is also very intent on retaining its foothold on any devices on which it is executed.  Samples from mid-July append the same aforementioned SSH key to the local "~/.ssh/authorized_keys" on the infected device upon execution.  This allows RapperBot to maintain its access to these infected devices via SSH even after a device reboot or the removal of RapperBot from the device – something that is atypical to most Mirai variants.  To better hide in plain sight, the latest samples use a more innocuous comment "system key generated by server 20220709" for the public key instead of “helloworld.”

In the latest RapperBot samples, the malware also started adding the root user "suhelper” to the infected device by directly writing to “/etc/passwd” and “/etc/shadow/”, further allowing the threat actor to take complete control of the device.  In conjunction, it adds the root user account every hour by writing the following script to “/etc/cron.hourly/0” in the event that other users (or botnets) attempt to remove their account from the victim system.  The command to add the root user is provided below.

Figure 1. illustrates how the latest samples of RapperBot work.  Dotted lines indicate potential actions that FortiGuard Labs assesses that the threat actor could perform but have not been observed in the wild. 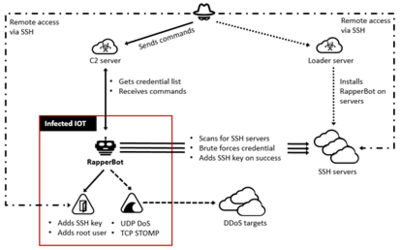 While early samples had strings in plaintext, subsequent samples added extra obfuscation to the strings by building them on the stack. This prevents common analysis tools and detection techniques from extracting human-readable strings from binary files (Figure 2). These latest samples implemented an additional layer of Mirai-style XOR encoding to hide these strings from memory scanners during execution.  While most Mirai and Gafgyt botnet operators, like Keksec, tend to include strings identifying themselves within the malware samples, the developers of this malware maintain a relatively low profile (apart from occasional references to rap music).

Network Protocol:  RapperBot communicates with its C2 server via TCP requests at separate ports to receive commands (443 in the latest samples), download SSH credential lists, or report valid credentials during SSH brute forcing.  The network protocol for commands is explained in further detail below.  Each request contains a bot ID, a 32-byte value hardcoded in the binary. FortiGuard Labs observed two IDs as follows:

As a side note, pivoting on these bot IDs allowed us to find older samples from November 2021.  However, the SSH brute forcing capability was only seen in samples from mid-June 2022.

RapperBot starts by sending a registration packet to the C2 server.  This includes the argument (referred to as “source” by Mirai) used when the binary was executed in the victim system, which usually provides some basic contextual info about its execution.  For instance, “ssh.wget.arm7” would tell the C2 that the binary was spread via SSH protocol, downloaded via the wget utility, and is of ARM architecture.

Here are the command codes supported by RapperBot:

0x02: Stop all DoS attacks and terminate the client

Right after the registration packet, the client sends another request to notify the C2 that the client is ready to receive commands.  The C2 server usually responds with a keep-alive command to acknowledge the request (Figure 3). Besides the keep-alive command, we did not observe any other commands from the C2 server during our analysis.

However, RapperBot does support a very minimal set of DoS attacks, including plain UDP and TCP STOMP flood attacks that are very similar to Mirai’s implementation.

The attack command structure is as follows:

FortiGuard Labs has been monitoring this threat for over a month.  During that time, it has undergone several interesting changes that raise more questions than answers when attempting to pinpoint the primary motivation of the threat actors in launching this campaign.  At one point, samples were observed where the DDoS attack capabilities were entirely removed and added back a week later.  Could the DDoS functionality have been retained for masquerading as a typical DDoS botnet to avoid drawing too much attention?  It is also possible that this whole campaign is still a work in progress.  Additionally, self-propagation was removed after a few days in late June, with the current focus on aggressively retaining continued access to brute-forced SSH servers. Are the threat actors more interested in collecting compromised SSH devices than expanding their botnet?  More important, analysts have not seen additional payloads delivered after brute forcing.  One can only speculate on why the threat actors are amassing a rapidly growing collection of compromised SSH servers.  Over 3,500 unique IPs have been observed in the past 1.5 months attempting to scan and brute-force SSH servers with the SSH-2.0-HELLOWORLD client identification string.  IPs from the US, Taiwan, and South Korea comprised half of the observed IPs (Figure 4). Although this threat heavily borrows code from Mirai, it has features that set it apart from its predecessor and its variants.  Its ability to persist in the victim system gives threat actors the flexibility to use them for any malicious purpose they desire.  Due to some significant and curious changes that RapperBot has undergone, its primary motivation is still a bit of a mystery.  Regardless, since its primary propagation method is brute forcing SSH credentials, this threat can easily be mitigated by setting strong passwords for devices or disabling password authentication for SSH (where possible).

Researchers from FortiGuard Labs will continue to monitor RapperBot’s development.

We would like to thank the Fortinet researchers for their continued collection and analysis.  Red Sky Alliance is a Cyber Threat Analysis and Intelligence Service organization.    For questions, comments or assistance, please contact the office directly at 1-844-492-7225, or feedback@wapacklabs. com