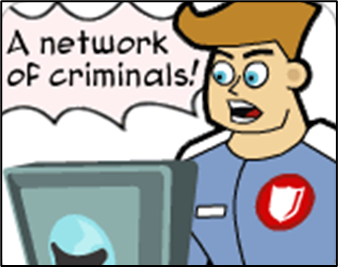 Birds of a Feather, Flock together.  An old, yet very true saying.  Cybercriminals are stealing a staggering volume of data and money from companies around the world. The damage from cyber-attacks costs businesses US$400 billion a year.  This has become a huge criminal enterprise and operators include state sponsored groups, such as Russia, China and North Korea.

Cybercrime groups have become more organized and specialized in the past few years.  Gone are the days of single actors placing malware or creating other havoc for organizations.  Cybersecurity reports often talk about threat actors and their malware/hacking operations as self-standing events.  In reality, the cybercrime ecosystem is much smaller and far more interconnected than the layperson might realize.

Cybercriminals often have complex supply chains, similar to legitimate software companies, and they regularly develop relationships within the rest of the e-crime ecosystem to acquire access to essential technology that enables their operations or maximizes their profits.  According to cybersecurity researchers, these third-party technologies can be classified into three categories: Services, Distribution, and Monetization.

Services category can include:

Tracking all the connections between groups and their suppliers, and who works with who, is almost impossible today due to the broad use of encrypted communication channels between parties.  However, in the realm of malware attacks, some signs of cooperation can be observed by the way the malware moves from attackers to infected hosts.  Although these connections can never be fully verified, it is obvious that when the Emotet malware is downloading the TrickBot malware - that the two gangs are cooperating (this as part of a "loader" mechanism provided by the Emotet crew for the TrickBot gang).[1]

In narcotic investigation, law enforcement often target lower level individuals in a criminal syndicate.  From there criminal investigators work their way into higher levels in the narcotrafficking organization.  Crime is crime and similar investigative tactics can be employed.  Law enforcement agencies are most likely to achieve better results in disrupting cybercrime operations when targeting these shared service suppliers.  This will result in disrupting the activities of multiple cybercrime groups at once.  While higher level cybercrime gangs often have effective operational security (OpSec) and do not reveal any details about their operations, targeting lower-tier enablers, who do not always protect their identities, could providing law enforcement agencies with data that could help them unmask and track down the bigger groups.