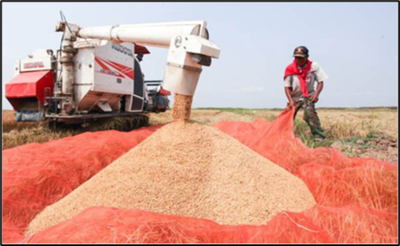 Just how much US land does China own?  Excerpts by Libertas Bella (edited).

American-US prosperity has largely been built on a dual foundation: cheap land or expensive labor.  Until the US Immigration Act of 1965, Ronald Reagan’s Amnesty of 1986 and North American Free Trade Association (NAFTA) opened up the floodgates of immigration (both legal and illegal) this formula basically held firm.  When there was not enough labor, employers had to pay more rather than simply importing massive amounts of cheap labor from countries with little in the way of worker protections.  The same laws allowing for a massive influx of cheap labor has also destabilized the American real estate market: More buyers mean more demand, which means higher prices for those looking to buy a home.

There are a myriad of social consequences from this; chief among them is that family formation is more expensive and thus less attainable for the average young American worker in the 21st Century than it was in years past.  Beyond this, there is the problem of allowing foreign nationals to own real estate in the US, a practice that is outlawed in a number of countries.  Where foreign nationals can own real estate, there are often restrictions on where they can buy and how much they can own.  The reasons for this hardly need explaining; yet first, the citizens of a nation have first claim on the land.  Second, it is potentially dangerous to allow too much of a nation’s land to fall into the hands of foreigners.

Currently 30 million acres of American farmland is owned by foreign investors or fully 2.2 percent of all American farmland.  For context, that is an area roughly the size of Mississippi or Pennsylvania.  These are effectively absentee landlords who own some of the best real estate in the US.  China owned 191,000 acres worth $1.9 billion as of 2019.  This might not sound significant, but Chinese ownership of American farmland has exploded dramatically over the last decade.  Indeed, there has been a tenfold expansion of Chinese ownership of farmland in the US in less than a decade.  Six US states — Hawaii, Iowa, Minnesota, Mississippi, North Dakota and Oklahoma — currently ban foreign ownership of farmland.  Interesting facts reported within the past 7 years is that 8 million acres of China's farmland is too polluted to farm.[1]  Hmmmmmmm.

China has 22 percent of the world’s population yet only 7 percent of the world’s arable land (not counting pollution).  Technological innovation since the 1960s has ensured that the country is self-sufficient in the production of grain ‘most’ years, but there have been occasions when it has had to import even its staple grain of rice.  Over the last decade, the stress on food production has increased, as China faces alarming environmental crises, including a significant depletion in its aquifers.  Rapid industrialization also is creating Chinese farm labor is abandoning the agriculture sector in droves, and most farmers are now over 50 years old.[2]

Massive Chinese investment in US farmland is troublesome for one glaring reason: It puts the food security of the nation in the hands of a hostile foreign power.  But there is also the social cost of allowing foreign buyers who have effectively unlimited resources to compete on the real estate market with smaller domestic buyers.  It is understandable if no one reading these facts has any tears to shed for Big Aggie (large farming corporations), but the real victims of this ownership are smaller landholders.  For those concerned about environmental issues, ask yourself who is more likely to practice good stewardship of the land, US farmers or Chinese bureaucrats thousands of miles away.

Australia has similar fears: According to Australia’s Register of Foreign Ownership of Agricultural Land, on 30 June 2018, 13.4 percent of Australian land in 2017-18 had “a level of foreign interest,” and 80 percent of this was on a leasehold basis.[3]

Chinese Real Estate Investors in the US - In addition to their farmland holdings, China owns more residential real estate than any other foreign country, which has a significant impact on the real estate market on the West Coast.  Does this sound far-fetched?  Market Watch reports, “Chinese buyers accounted for roughly 25 percent of total foreign investment in US residential real estate.”  Canada was far behind at a relatively scant 9 percent.  The article specifically mentions Chinese investment in California real estate as a driving force behind high housing prices in the Golden State.  It is interesting to note that many of these properties are owned as rental properties by absentee landlords.[4]  Again, who is going to care more about the quality of tenant life?

China has been buying and developing many areas of the world, consistent with their Belt and Road initiative.  Targeting Western countries is a site on their radar.  Along with real estate, Red Sky Alliance has reported the cyber intrusions into many countries, including the US.  Bans have been placed on many Chinese cyber advances as evidenced from the recent UK regulator Ofcom who cancelled the communication license of China Global Television Network (CTGN), an international English-language satellite news channel, to broadcast inside the UK.  In retaliation, China banned the British Broadcasting Company inside China.[5]  Huawei and ZTE have been place on US banned companies and products.

Our cool collection and analysis tool RedXray and support tool RedPane can help with supporting network defenses and MSSP’s - in a proactive manner - by identifying underground threats and vulnerabilities.  This service is an excellent complement to a network defense for any foreign or domestic cyber threat.