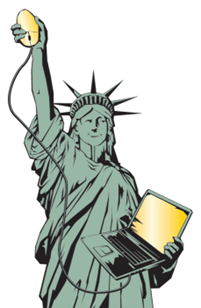 The US National Security Agency’s No. 2 official said on 7 September that the US still outpaces foreign adversaries when it comes to cybersecurity and technology thanks to the country’s “open society.”  The US and its democratic allies “enjoy things that cannot be replicated easily in autocratic societies,” the NSA’s deputy director, said during the Billington Cybersecurity Summit in Washington, DC.[1]

“The grist of that is innovation.  Innovation sparks creativity and solutions.  That puts us ahead and it’s not just in our technology, but it’s in our processes, the way we attack problems,” he added.  “People in the US and within many of our nations that we partner with, they go with the art of the possible.  They don’t look at it through the lens of autocratic control and so that generates different outcomes that are much more relevant and they’re speedy.”

The NSA chief specifically called out China, which has invested significantly in cutting-edge technologies like supercomputing and advanced analytics.  “The scale of their pursuits are daunting, are scary,” he told the audience. “But I still don’t think they can replicate the way we bring magic together between people with technology and the things that have always generated the bleeding edge technologies.  I’ll just say, here in the US, that continues, and that’s the thing we have to pursue, because that’s what differentiates us.”

The NSA deputy director, who has held his current role at NSA since 2017, said that the country has not approached developing technology from the standpoint of “being paranoid about its misuse and misapplication.”

“Our society doesn’t operate that way and for good reason.  We have an open society, which is our strength, but that makes us more vulnerable to those who would want to penetrate us and subvert our interests,” he emphasized.  “And so the thing that keeps me up at night is the lack of preparedness that we have to have as a society to keep bad things at bay.”