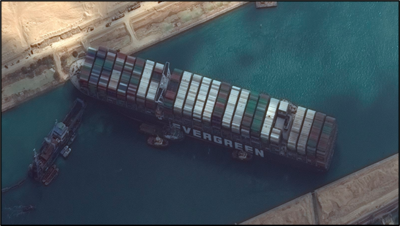 With the recent shipping stoppage in the Suez Canal, it became very apparent the transportation vulnerabilities in areas of constricted passages.  Preliminary reports indicate mechanical and weather errors caused the grounding; or was it?  Engine failure and heavy weather have both been cited as reasons behind merchant vessel (M/V) Ever Given’s grounding in the Suez Canal.  But neither are convincing and plain old navigation errors (humans) may be at the root of the casualty, report Lloyd's of London.  Vessels backed-up in the canal and commerce was halted in its tracks.  The eventual freeing of the  M/V Ever Given, provided many with a sigh of relief.  There is room for celebration, but bad guys now know the effects of stopping a shipping lane, which in this case was at a cost of roughly $10 billion a day.  The M/V Ever Given is owned by the Evergreen Marine Corporation, a Taiwanese container transportation and shipping company headquartered in Luzhu District, Taoyuan City, Taiwan.

Every day the M/V Ever Given blocked the Suez Canal compounded the problem as containers already booked on future voyages sat on stranded ships and supply chains began to break down.  Several countries intervened to assist the predicament.  The M/V Ever Given serves as a stark reminder to initiate the canal’s security architecture into the 21st century and ensure that it continues to fulfill its historic role as the vital channel between Europe, Africa and Asia.[1]

While proposals for physical upgrades to the Suez are already being proffered, a less-discussed issue is that the current legal architecture governing the Suez is hopelessly antiquated and new mechanisms are needed to deal with modern vessels and potential threats.  The Convention of Constantinople that regulates the canal's traffic has been in place since 1888 (even after former Egyptian President Nasser nationalized the Suez in 1956) on the premise that the canal is such a collective good, no one would be reckless enough to try to harm it, and it should therefore simply be kept open to all properly flagged and insured vessels, regardless of origin.

Bloomberg reports that this premise has unfortunately encouraged a passive rather than pro-active security posture inadequate to the 21st century.  That is especially concerning as hostile actors such as Iran and its terrorist allies have demonstrated their willingness to attack civilian infrastructure while playing fast and loose with what should be the norms of international shipping, such as keeping a vessel’s GPS on at all times (Iran has a bad track record of turning their vessel GPS systems conveniently on and off).  Many analysts are urging more modern authorities already in place should allow the US and Egypt to lead a new effort to leverage the collective strength of their partners and allies to secure the Suez Canal against threats ranging from terrorist and cyber-attacks to accidental blockages.  This is also true for other critical shipping passages.

One such authority would be the International Maritime Organization (IMO) Code, which could be applied in conjunction with regulations such as United Nations Security Council Resolutions 1772 and 1816.  Those resolutions, created in response to a rising piracy threat, would be applicable to this case because they authorize international cooperation for collective security in the region.

Some suggest the US can also assist by expanding the scope of the International Maritime Security Construct, more routinely known in the US as the Combined Task Force Sentinel.  The Task Force was established in July 2019 to defend against Iranian piracy and terrorism in and around the Straits of Hormuz and Bab el-Mandeb.  It should now include the Suez Canal Zone in coordination with the Egyptian Army (which secures the Zone) and the Suez Canal Authority (which oversees logistics and payment), welcoming participation from all nations that depend upon preservation of maritime trade routes.  The Task Force is a multinational coalition (including Albania, Bahrain, Estonia, Lithuania, Saudi Arabia, United Arab Emirates, the UK and US), which exists to maintain freedom of navigation for commercial traffic passing through the strategic straits of the Middle East.  Since its creation it is provided security, on request, to more than a thousand merchant ships, both physically and through a constellation of information and intelligence to heighten awareness of potential threats and to deter unlawful, unsafe and unprofessional activity.

If expanded, this defensive operation would include surface vessels and airborne surveillance, as well as the supporting command, control and communications needed to integrate the network.  The Task Force construct could encompass a fusion of all the intelligence and threat assessments from participating nations that would enable it to anticipate, defend and, when required, respond to security incidents or accidents.  It could pool its members' physical assets and resources to manage crises or disruptions and enable the canal to rapidly return to operation.  Such a coordinated, rapid-response system might have shortened the M/V Ever Given blockade by days and saved money, which will eventually be pushed to consumers.

For now, the greatest Suez vulnerability is in the cyber domain.  Red Sky Alliance has for many years been focused on cyber focused type maritime threats.  Cyber security professionals have witnessed numerous hostile cyber-attacks against industrial control systems in recent years.  The canal’s information technology and communications architecture, the equivalent of an air traffic control system, is equally vulnerable.  The US, and Israel in particular, can contribute new technology to ensure the system is properly safeguarded and possesses the necessary redundancy to protect it from malfunction or sabotage.  Such steps would safeguard not only the vital maritime trade during the global recovery from the pandemic, but also ensure the protection of the equally-vital undersea communications cables which are co-located with the Suez Canal.

Roughly 500 ships passed through the Suez in the year the Convention of Constantinople was signed; Egypt would like to see that number top 19,000 in 2021. While the M/V Ever Given accident triggered a crisis, it did not rise to the level of a catastrophe.  Many shipping experts say swift action led by the US and Egypt, in concert with our strongest regional allies, can prevent a future episode from becoming one, as well.  When the French sculptor Frederic Auguste Bartholdi originally conceived of a colossal female figure in the 1860s, it was to be, in imitation of the ancient world's Colossus of Rhodes, standing at the mouth of the Suez Canal where the Lighthouse of Port Said is now.  Budget overruns prohibited the project, which Bartholdi repurposed to become the Statue of Liberty in New York Harbor.  Bloomberg opines, “How fitting it would be if the US could now partner with Egypt to create a virtual rendition of the original monument to stand guard over the Suez Canal in the 21st century.”

Red Sky Alliance has been has analyzing and documenting these type of cyber threats for 9 years and maintains a resource library of malware and cyber actor reports available at https://redskyalliance.org at no charge.  The past 3 years have seen our analysts focus on vessel impersonation, a way that malware is spread throughout the transportation supply chain.  We supply weekly Maritime Watch Lists to help shippers black-list potential attacks.  Red Sky Alliance can provide actionable cyber intelligence and weekly black-lists to help protect your network.

Tags: ever given, maritime, grounding, suez canal, transportation
E-mail me when people leave their comments –
Follow