In the past several weeks, South Africa has experience violent riots in response to the arrest of its former president.[1]  The unrest is having serious repercussions for the country's mining sector. The outbursts, located in the province of KwaZulu Natal, are hampering the activity of local mines, but also that of Durban and Richards Bay port terminals.  On 22 July, a cyber-​​attack has directly disrupted the operation of South Africa’s busiest container terminal.  It’s the largest on the African continent and this stoppage will directly affect mining operations in the Democratic Republic of Congo and Zambia who use these ports to export its copper and cobalt.[2]

Transnet, which operates major South African ports including Durban and Cape Town, and a huge rail network that transports minerals and other commodities for export confirm and sources identify the cause of disruption in IT applications.  A company spokesperson declined to comment on whether the cyberattack, which is causing confusion.  Two sources who asked not to name because they were not authorized to speak to the media said the attack had occurred early on the 22nd.

“Please note that the port operating system has been cyber-attacked and there will be no cargo movement until the system is restored,” the Cape Town Harbor Carriers Association said in an email to members.  The official Transnet website went down on Thursday with an error message. 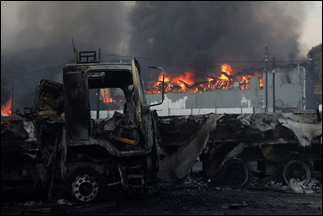 State-owned enterprises were already hit by heavy rioting, protests and turmoil in ports and freight railroads last week after days of anxiety and violence in parts of South Africa.  The recent South African upheaval has delayed vital shipping containers and auto parts, but the goods were largely unaffected because they were elsewhere in the port, sources report.  Both the physical and cyber issues is also creating a shipping backlog that can take a long time to clear.  Delays equals lost revenue.

At Red Sky Alliance, we can help cyber threat teams with services beginning with cyber threat notification services, and analysis.  And we are always available to help and support your needs. Red Sky Alliance is   a   Cyber   Threat   Analysis   and   Intelligence Service organization.  For questions, comments or assistance, please contact the lab directly at 1-844-492-7225, or feedback@wapacklabs.com