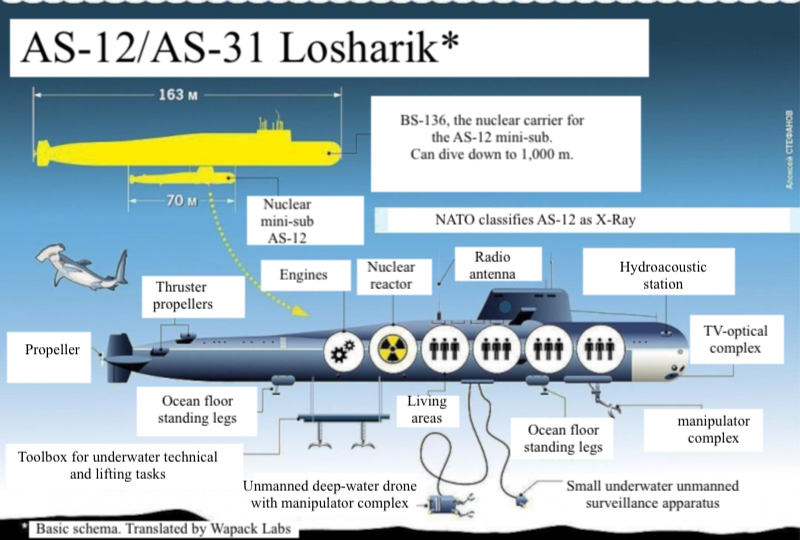 On 1 July 2019, fourteen Russian sailors died in a fire during the testing of a secret Russian military submarine.   The type of vessel is believed to be an AS-12/AS-31 “Losharik” deep-diving nuclear sub.  While the Russian government insists, they were just surveying the ocean floor for science, the high military ranks of the participating sailors show that the spy capabilities to include taping and severing undersea communication cables are the primary functions.

Russia lost seven high-ranking officers, two bearing the title Hero of Russia, during the accident on the secret nuclear-powered submarine.[1]   Russian Minister of Defense said the fire was the cause of death and located in the accumulator block of the submarine.[2]  The submarine at the time of the accident was conducting tests in Russian waters in the Barents Sea, likely at the Northern Fleet training range.[3]   A non-military industry representative was present on the sub with the navy crew, which also confirms the testing mode.

The Russian government insists that Losharik is used for the scientific Arctic Ocean floor research, but independent analysts find that this classified vessel likely has various spy/military functions (Figure 1).[4]

Russian multipurpose research/spy/military fleet grew in its capabilities. It should be considered as a real threat similar to Russian cyber and Russian GPS-interruption efforts.