ProxyLTE, a supplier of US based mobile and home router proxies, has been identified as one component in a large-scale fraud, targeting a Wapack Labs’ client. ProxyLTE.com was created in late 2017, however associated malware was first observed in 2013. This report includes details on ProxyLTE malware and associated infrastructure.

Beginning in 2018, Wapack Labs began tracking botnet activity affecting a client. As part of this analysis, we profiled the traffic to identify command and control (C2) channels. A common thread among the botnet communications was a popular mobile game – Player Unknown Battleground (PUBG). Additional analysis revealed that many of the bots linked to PUBG were subsequently rented out by ProxyLTE. This connection indicates a larger supply chain of compromised mobile devices originating from PUBG gamers with ProxyLTE operating as a major reseller.

ProxyLTE.com was first registered in October of 2017 and has since advertised on several hacking sites on both the surface and dark webs, as well as in IRC chatrooms frequented by hackers. Bot the mobile device and the home router proxies are offered for as little as $9 per day. 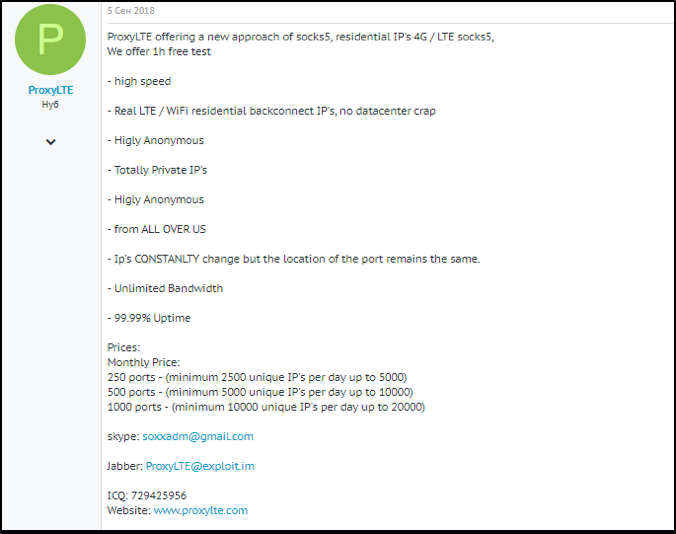 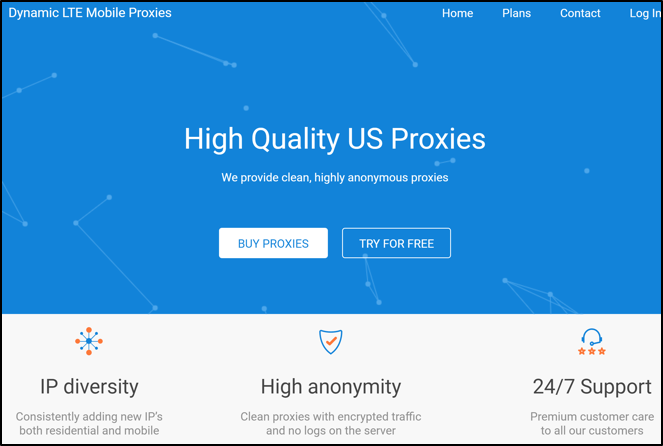 Wapack Labs obtained 46 mobile proxies from ProxyLTE as part of a trial. Our analysis revealed that over half of the proxies had made connections to Tencent’s PUBG chat endpoint at 49.51.42.110 within a 24 hour period, indicating the proxies were originally sourced from PUBG gamers.  Additionally a total of 11  C2s were identified, all hosted by German hosting company Hetzner Online. All compromised proxies were either managed on ports 3665,3666, or 4996. Additional traffic was observed on 18080, which is the default port used for Monero cryptocurrency mining. The primary proxy endpoint provided in the ProxyLTE trial was 54.38.228.38, as shown in Figure 2. Passive DNS on this IP showed a record for infused.soxx.us. The soxx.us domain exposed a much larger infrastructure linked by soxx.us subdomains as well as the following SSH fingerprint

This additional infrastructure consists of over one hundred related domains and IPs. These domains and IPs were listed as C2 nodes in a number of malware specimens dating back to 2013. This included Windows executables and Android APKs, many of which appeared to be voice message applications, for example, “Craigslist-Voice-Message.exe” and “VoiceApp.apk.”

ProxyLTE is part of a larger trend of growing mobile proxy botnets. Starting in mid-2018, Wapack Labs observed the use of mobile device proxies in various botnet activity and large-scale industrial fraud. A compromised mobile device offers several advantages for attackers. For one, malware removal on mobile devices is far less common and much more difficult than regular computers. This means an attacker can get more mileage out of a single mobile device. Second, mobile devices are more likely to change IP addresses making IP blacklisting an unrealistic defense strategy.