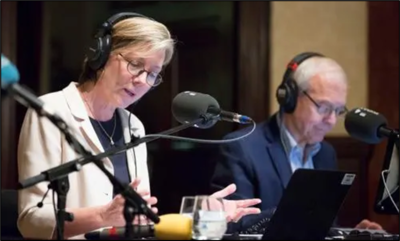 Last week, Russia blocked access to BBC website and the media outlet resorted to broadcasting news bulletins over shortwave radio in the country.  According to a UK media report, the BBC said it was bringing back the WWII-era broadcasting technology in the region, just hours before its sites were banned.  "It's often said truth is the first casualty of war.  In a conflict where disinformation and propaganda is rife, there is a clear need for factual and independent news people can trust and in a significant development, millions more Russians are turning to the BBC," said the BBC Director-General.  "We will continue giving the Russian people access to the truth, however we can."

As part of its resilience operation to ensure news is available in Ukraine and Russia, the BBC has also stepped up services on other platforms.[1]  It launched two new shortwave frequencies in the region for four hours of World Service English news a day.  These frequencies can be received clearly in Kyiv and parts of Russia.[2]  Shortwave radio uses frequencies that carry over long-distances and are accessible on portable sets.  The BBC said its shortwave broadcasts will be available on frequencies of 15735 kHz from 6 p.m. to 8 p.m. and 5875 kHz from midnight to 2 a.m., Ukraine time.  News will be read in English, which the BBC says will be available in Kyiv as well as "parts of Russia."  Shortwave radio has a long history of wartime broadcasts.

The UK publication The Guardian reports that its usage peaked during the Cold War, but that it was also used throughout WWII to broadcast propaganda.  The BBC World Service ended its use of the technology in Europe in 2008 after 76 years.

The Russian communications watchdog Roskomnadzor has also restricted access to the US government-funded Radio Liberty, Voice of America, Meduza (a Russian and English-language news site based in Latvia), and German state-owned broadcaster Deutsche Welle.

The audience for the BBC's Russian language news website more than tripled its year-to-date weekly average, with a record reach of 10.7 million people in the last week (compared to 3.1 million).  In English, bbc.com visitors in Russia were up 252 per cent to 423,000 last week, the media outlet announced in a statement.  The live page in Russian covering the invasion was the most visited site across the whole of the BBC World Service's non-English language services, with 5.3 million views.

Audiences for the Ukrainian language site more than doubled year-to-date, with a reach of 3.9 million in the past week (compared to 1.7 million) and the audience for bbc.com increased 154 per cent in Ukraine.