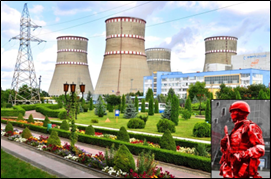 The Ukrainian energy agency responsible for the oversight and safe operation of the nation’s nuclear power plants said earlier this week that Russian hackers had launched their most ambitious effort yet on the company’s official website.  The attack appeared to fail and there was no indication that it threatened to disrupt the Ukrainian power grid or the company’s oversight of the nation’s 15 working  nuclear reactors.

The company, Energoatom,[1] said it had managed to keep the attack from being visible to users of the website.  Even so, it was a reminder of the digital threat posed to the power infrastructure in Ukraine, where the shelling of the Zaporizhzhia Nuclear Power Plant has stirred global alarm.[2]

Ukraine’s power grid has been knocked offline twice before, in 2015 and 2016, causing widespread blackouts, and Russian efforts to attack the Energoatom site are being closely watched in case they presaged a larger event.

The previous large-scale cyber-attacks against Ukraine, like knocking out its power grid or frying cellular service, was the concern of Western based intelligence officials who predicted would accompany the Russian invasion yet failed to materialize.  But Russia has used cyber hacking campaigns in support its military ground campaign, pairing malware with missiles in several attacks.  This includes TV stations and government agencies, according to a report released in April of this year by Microsoft.

Ukrainian officials said this spring that they had thwarted a cyberattack on Ukraine’s power grid that could have knocked out power to two million people, raising fears that Moscow was continuing to persist in its digital efforts to advance its military campaign.

The daily shelling targeting the Zaporizhzhia complex, which is Europe’s largest nuclear power plant, has sparked international concerns about the possibility of a radiological meltdown.  The United Nations has offered to help send nuclear inspectors to the site, which is currently occupied by Russian forces but is now operated by Ukrainian workers; this if both sides agree.

It remains unclear who is to blame for the shelling. The Ukrainians have accused the Russians of directing strikes there to cut off energy supplies to other cities, while the Russians say Ukraine is responsible for the attacks.

On 16 August, the French president and the Ukraine president spoke by telephone about safety threats and concerns at the Zaporizhzhia plant.  According to a statement from France, its president stressed his concern about the impact of “ongoing clashes on the safety and security of Ukrainian nuclear facilities” and called for the withdrawal of Russian forces.