The past few months have seen a new ransomware variant emerge that is being distributed by the TrickBot malware. The appearance of this new ransomware, named Conti, corresponded with an observed decrease in Ryuk deployments. This suggested that Conti is the “successor” of Ryuk. Some media outlets have also reported that Conti was an evolved version of Ryuk, suggesting that it has evolved from the RYUK source code. While this may have been true for very early samples, a Red Sky analysis of recent Conti and Ryuk samples tell a different story. As we will show, they both share capabilities that are common with other ransomware, and there are significant differences in implementation at the machine code level.

The RYUK ransomware was initially identified in August 2018 by Check Point Research. RYUK is operated by the WIZARD SPIDER threat group, a Russian cybercrime group that also operates the TrickBot banking trojan infrastructure. These malwares are typically targeted at large organizations with the goal of ransoming victim data for high dollar values. The first ransom notes indicated requested payments in the amounts of between 15 and 50 BTC. In January 2019, Crowdstrike analysis of Bitcoin addresses associated with RYUK showed a cumulative net value of over 705 bitcoin which at the time was equivalent to approximately $3.7 million USD. According to the FBI, RYUK operators have netted over $61 million USD over its lifetime as of February 2020. 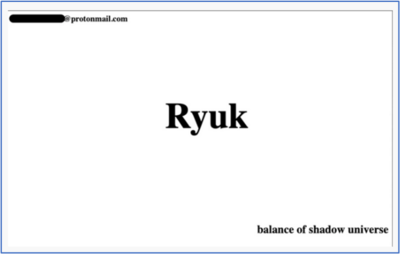 From a technical perspective, RYUK evolved from the HERMES ransomware. As such, several core operational capabilities were initially shared:

RYUK is typically manually deployed by an attacker after gaining an initial foothold inside a victim network. It has also been observed delivered as an email attachment during spear-phishing campaigns.

Over time, RYUK has evolved significantly. Recent 2020 samples have been observed with increased encryption speed compared to prior versions. This is achieved by dropping additional copies of the ransomware encrypter to disk and running them in parallel at the operating system process level. RYUK also tries to inject itself into other processes.

RYUK takes extensive measures to disable enterprise backup services and OS services that could facilitate data recovery without paying the ransom. Examples of this are deleting filesystem shadow copies and disabling Microsoft Windows’s Automatic Startup Repair feature. This is a common feature of ransomware, but RYUK’s capability covers a larger array of backup and recovery software than other ransomware.

The source code origin for CONTI is unknown. While it does share some common capabilities with RYUK and other ransomware strains, Red Sky Alliance was unable to find any significant overlap in the code segments of RYUK and CONTI samples obtained from VirusTotal. SSDEEP hash comparison showed no overlap. Additionally, there were enough significant differences in the operational and implementation details to indicate they are not related at the source code level.

CONTI has also been seen in the wild attached to emails related to spear phishing campaigns.

At launch, CONTI checks for a run time marker to see if another instance of the encrypter is already running and if so, it terminates. This marker is the named mutex “_CONTI_”. Red Sky Alliance was able to prevent CONTI from encrypting a test victim VM by creating a software program that created an identical mutex. When launched, all the tested CONTI samples immediately exited without executing the encrypter payload. Incidentally, the ransomware appears to have received its name based on this mutex. 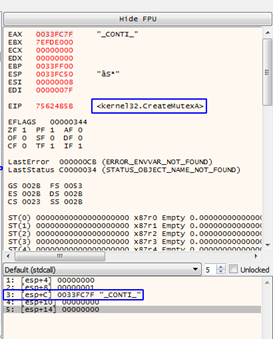 RYUK and CONTI share similar capabilities at only the most basic level. These features are also common to other ransomware strains: