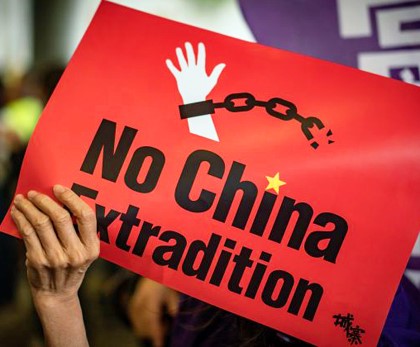 The Hong Kong government’s attempt to enact an extradition agreement with mainland China sparked mass demonstrations in Hong Kong in June 2019.  Protesters took to the streets in record numbers, with as many as two million protesters reported at the peak of the demonstrations.  By 23 June, Hong Kong’s Chief Executive had suspended action on the extradition bill.

The mainland Chinese government’s reaction to these events has been surprisingly weak.  Throughout the month of June, China’s Foreign Ministry statements focused more on outside reaction rather than the protests themselves, often repeating the common diplomatic formulation that “Hong Kong affairs are purely China's internal affairs” and “no other country has the right to interfere.”  As the crisis continued, the Foreign Ministry repeatedly called on the US to “stop playing dirty tricks that meddle in Hong Kong affairs, give up delusions to instigate chaos in the Special Administrative Region [Hong Kong].”  The most serious move by Beijing was to call in the US Embassy Chargé d’ Affaires into the Foreign Ministry to “urge the US side to take a fair and just attitude” toward Hong Kong.

Chinese official and unofficial media were used to shape the narrative about Hong Kong, again focusing primarily on US interference.  They charged that “some international forces have increasingly collaborated with the opposition in Hong Kong,” citing meetings in May between opposition groups and Speaker Pelosi and Secretary of State Pompeo.  They called the US Senate’s draft Hong Kong Human Rights and Democracy Act an “insidious act to turn Hong Kong into a new tool to add pressure on the Chinese mainland.”

However, the Beijing government, as of the end of June 2019, had made no threats or ultimatums against the demonstrators or the United States.  In fact, the demonstrations themselves received almost no coverage at all in Chinese domestic media.  This situation could, however, become more volatile if demonstrations continue and are directed more pointedly at Beijing’s control of Hong Kong.