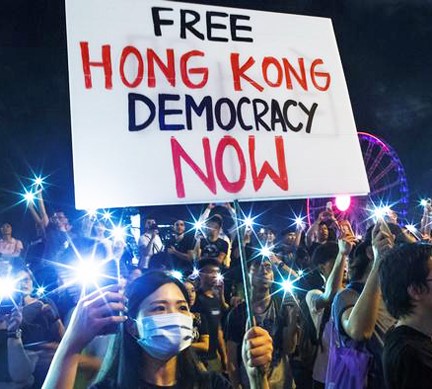 Hong Kong conducted District Council elections on 24 November 2019.  These local councils handle quality-of-life issues for their constituents, but the elections were seen as a referendum on the anti-Beijing protests that have rocked Hong Kong for several months.  The election results strongly favored pro-democracy forces.  Of the 452 seats contested, 388 were won by pro-democracy candidates and only 62 went to pro-establishment parties.

The clear message that most Hong Kong citizens supported was the call for genuine democracy, which raised the question of how Beijing would proceed if the demonstrations continued.  The initial responses of the Beijing government, as seen in official government statements and in comment by official and unofficial media, suggest that Beijing has no clear idea of how to deal with the Hong Kong crisis.  President Xi Jinping and the Foreign Ministry had essentially nothing to say about the elections.  Commentary in official press relied instead on quoting Chinese academics who took a cautious tone and said it was a time for “reflection.”

Instead, the Chinese government and media focused their frustration on the United States, claiming US interference and condemning the Hong Kong Human Rights and Democracy Act signed by President Trump on 27 November 2019.  Even that push-back used standard political language, and the only actual countermeasures taken were the cancelling of US Navy port calls in Hong Kong and sanctions against some NGO’s.

Beijing has no obvious options to counter the pro-democracy movement.  They cannot agree to greater Hong Kong autonomy without endangering Communist Party rule in China.  They cannot crush the protests without endangering their position in the international community.  Beijing can hope the protests will just fade away, but if they accelerate, what then?