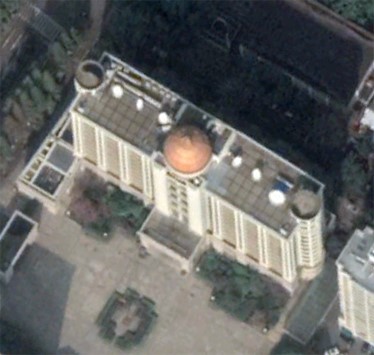 A reexamination of the academic work published by the Nanjing Military Region First Technical Reconnaissance Bureau showed its primary focus was on network security and computer operations issues.  This suggests that, like some other Tech Recon Bureaus (TRB’s) in the Chinese military, this unit has likely developed a cyber operations mission.

Details about this unit were revealed by searches for its cover designator, the “73610 Unit.”  This element is located in central Nanjing in a large administrative complex built around 2005.  This complex features a 12-story administrative building (see above) that is likely the Headquarters for the Nanjing First TRB.

Further research indicated that the 73610 Unit designator indicates the Bureau Headquarters, and other designators were found for several subordinate elements.  These include:

Nanjing First TRB Third Office, which is located on another apparent SIGINT operation facility in the Songjiang District of Shanghai; and

Based on addresses found in the academic work, the cyber operations element, name unknown, appears to be located in the Bureau Headquarters.