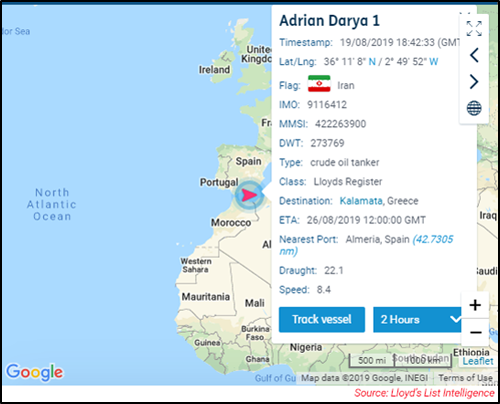 Iran is openly warning the US against any attempt to seize an oil tanker freed from Gibraltar after being detained last month.  The Iranian-controlled vessel, recently renamed by Iran as the Adrian Darya 1, is transiting through the Mediterranean Sea after leaving the British territory late on 18 August 2019, despite a US State Department attempt by the US over the weekend to block its departure.  The ship is carrying 2.1m barrels of oil and is reported to be heading for a Greek port.  The voyage will take several days.[1]  Greece said on 20 August 2019, it has not had a request for an oil tanker.  The US is warning Greece against helping the VLCC Adrian Darya 1.[2]  Vessel tracking has the VLCC Adrian Darya 1 is currently headed east (20 August 2019), just north of Oran, Algeria.[3]

Iran has declared the decision to release the ship to be a victory over the US.  Iran has reportedly issued a warning through official channels, especially through the Swiss embassy.  Switzerland represents US interests in Iran. Tehran has no official diplomatic relations with Washington.  However, Iran has indicated that the release of the tanker does not necessarily mean that the UK-flagged oil tanker M/T Stena Impero, detained by Iran in the Strait of Hormuz in retaliation for the seizure off Gibraltar, will be freed.

The Stena Bulk, which owns the tanker, said it had no indication how the release of the Iranian tanker may have on its vessel and crew.  The renamed Grace 1 is now heading for Kalamata, Greece and the vessel’s estimated time of arrival (ETA) is 25 August 2019.  Kalamata is Greece’s chief port in its Messenia region. 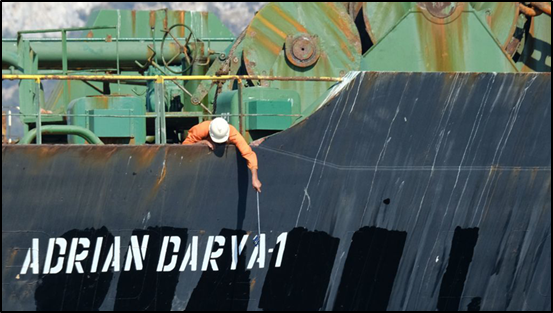 This past weekend, the US State Department sought to seize the ship through forfeiture proceedings.  But on 18 August 2019, the Gibraltar government released a statement saying the US request for mutual legal assistance for its Supreme Court to provide “restraining assistance” was refused.  Gibraltar authorities stated that current US sanctions do not constitute any offences in their jurisdiction and there were no equivalent sanctions in Europe.  Thus, the vessel was released.  The UK government (Gibraltar is a territory of the UK) said Iran must abide by the assurances it provided, which resulted in the release of the vessel.

It was unclear where the VLCC Adrian Darya 1 may head if Greece refused it permission to dock.  Cyprus, further east, has bitter experience from seizing Iranian products destined for Syria.  Munitions it confiscated in 2011 exploded, which caused its worst peace-time disaster.  European Union nations and the US both ban Iranian oil sales to Syria.  It is feared that the Adrian Darya 1 product is destine for Syria.

The M/T Bonita Queen is managed by Singapore-based IShips Management and is allegedly linked to the Iranian-controlled Grace 1 (now the Adrian Darya 1).  The true owner is not currently known.  The M/T Bonita Queen loaded its 600,000-barrel cargo at Kharg Island on 2 August 2019, based on vessel-tracking data.[4] [5]  Analysts report that the M/T Bonita Queen is headed to a port in Dubai, then set sail around Africa, by-passing the Suez Canal, then rendezvous with another oil tanker and conduct a ship to ship (STS) transfer of product.  The end destination is alleged to be Syria.