US crude oil by rail volumes have fluctuated sharply over the past decade.  In 2008, US Class I railroads originated 9,500 carloads of crude oil.  That grew to 493,146carloads in 2014, but then had fallen to 128,967 carloads by2017.  Rail crude oil volumes are affected by a variety of factors, including pipeline capacity and crude oil prices.[1]

The growth in domestic crude oil production presents a tremendous opportunity for the United States to move closer to energy independence.  Railroads have been crucial to this effort: 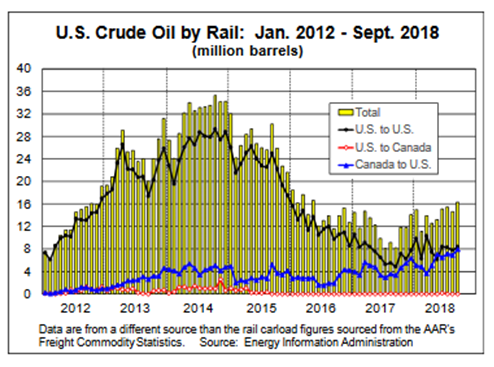 On Thursday, 23 May 2019, the New York City Police Department (NYPD) reportedly arrested 23-year-old Isaiah Thompson for pulling the emergency brake on a northbound 2 train near 14th Street in Manhattan two days prior.  Just before his arrest, MTA officials told media sources they believed a group of suspects, described as a mix of anarchists and graffiti artists, were responsible for the recent spike.  According to the NYPD, there have been at least 40 separate incidents since March, including 12 seemingly malicious brake pulls so far this month.

On Friday, 17 May 2019 law enforcement personnel in Minneapolis, Minnesota, responded to a call that a group of male youths had been reportedly threatening people at the University of Minnesota light rail platform.  According to local media reports, at least two of the suspects were armed with metal pipes.  The incidents occurred at the East Bank station of the Green Line.

On Tuesday, 21 May 2019, train services in the Eastern Railway Sealdah division saw a second day of transportation disruptions due ongoing protests from demonstrators who continued to block railway tracks at Kolkata’s Kankinara Train Station.

Wapack Labs, located in New Boston, NH and is a Cyber Service Provider and Threat Analysis and Intelligence organization supporting the Red Sky Alliance and clients in numerous sectors.  For questions or comments regarding this report, please contact the lab directly by at 1-844-492-7225, or feedback@wapacklabs.com.