Merchant tankers (M/T) lead the way on seafarer safety.  Safety is fully backed by the oil and gas sector and their maritime oil and gas shippers.  Of the 753 very serious incidents that took place since 2014; 363 accident investigation reports exist, giving a compliance rate of 48 percent, according to the IMO's GISIS database.  Statistics from the insurance firm Allianz and the dry bulk shipowner’s association Intercargo, indicate a declining rate of maritime incidents over the past decade.

While these are promising results, maritime mishaps need to be reduced to zero.  With artificial intelligence (AI) and self-navigating ships a “soon to be” reality, this safety goal could possibly come to fruition.  In the meantime, priorities with cooperation, collaboration and a sincere concerted effort by international flag states and other shipping stakeholders to publicly share information about the cause of accidents, is needed.[1]  This will ensure better preventative practices to be put in place.

Researchers at Lloyd’s of London reported there have been three very serious mishaps during January 2019 to the end of March.  These mishaps led to three dead and missing crew members.  That compares with 39 incidents in full-year 2018 and 130 in the preceding 12 months.  In 2014, 230 very serious cases were reported.  Some researchers believe that the decrease in serious incidents “may” be in lower reporting percentages.

One of the factors that greatly contribute to safety is the mandatory submission of maritime accident investigation reports to the International Maritime Organization (IMO) following “very serious” casualties.  Very serious incidents are categorized as loss of life or total loss of a vessel.  Major environmental pollution now falls under this category.  An investigation last year revealed that about half of these reports had not been submitted to the IMO’s Global Integrated Shipping Information System, when compared to the previous four years.

The same analysis, but stretching over five years, indicates the level of submissions remained basically unchanged.  Of 753 very serious incidents since 2014, 363 initial reports exist, giving a compliance rate of just 48%.  Some incidents had duplicate reports which have not been factored into the calculations.  At least 817 seafarers lost their lives in these incidents, while the passenger death toll stood at 1,668, mainly from ferry accidents in Asia and Africa.  According to data extracted from the IMO’s GISIS system, the flag states with the most reports outstanding mishaps are Indonesia, Panama, the Marshall Islands and Hong Kong, followed by Liberia, Russia and the US.  Three of the world’s biggest flags, which pride themselves on being quality-assured, appear in this list.  They are also the biggest contributors to the IMO, which collects revenue based on tonnage.  In 2017, revenues from all contributions amounted to USD$39m (£30m). 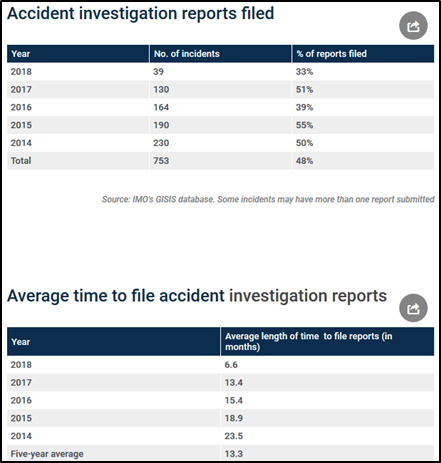 The length of time to file reports is on the decline.   In 2014, the average report time was 23.5 months for the 50 percent of reports that were filed publicly.  That declined to 15.4 months in 2016 for the 39 percent of reports filed, and 6.6 months in 2018 for the third of reports submitted.  As the analysis shows, many reports still do not appear, even after all this time has lapsed, meaning no lessons can be learned, while risking the lives of seafarers.  The sinking of the converted very large ore carrier M/V Stellar Daisy more than two years ago, which resulted in the loss of 22 crewmen, pushed the length of reporting time into the spot light.  The reporting administration in the Stellar Daisy case was the Marshall Islands, which has 22 other reports missing from the database.  On average, the IMO reports that the time taken for a report to be investigated and filed ranged from two months in very rare instances to as many as 58 months.  Individual flag state mishap data is available through IMO.[2]

Who has the best mishap reporting?  The UK has the best reputation when it comes to maritime accident investigations.  Although the vast majority concern fishing vessels, which are said to be more straightforward to conclude, the UK’s Marine Accident Investigation Branch has submitted all required documentation regarding the 42 very serious accidents listed in the IMO database.  Quick and accurate reporting results in better safety practices.

Many factors account for ensuring a safe maritime culture. Training and education are two, while good operating standards by companies is another.  For shipping, the lack of reporting or delayed filing of accident investigation reports has a huge impact on future mishaps.  Aviation crashes or rail accidents are often followed up much more quickly than incidents at sea, which suggests limited political or public pressure.  This needs to change, in order to ensure better seafarer safety.

The UK based Rolls Royce Marine, Kongsberg Marine and Yara Marine Technologies AS in Norway are leading the way on self-operational vessels.  The technology is on the backbone of artificial intelligence (AI).  Using technology to avoid human error, will go a long way in better maritime safety.  Yet as seen in some aviation accidents, AI cannot totally eliminate human involvement, and must always remain a factor in operations.

A recent Norwegian research paper[3] titled: 'AI + safety,' scientists assert that data-driven models alone may not be sufficient to ensure total safety and are indicating calling for a combination of data and causal models to mitigate risk.  The position paper details the advance of AI and how such autonomous and self-learning systems are becoming more and more responsible for making safety-critical decisions.  The operation of many safety-critical systems has traditionally been automated through control theory by making decisions based on a predefined set of rules and the current state of the system.

Conversely, AI tries to automatically learn reasonable rules based on previous experience.  This research was based upon the oil and gas industry, yet show similarities.  As stated above, with varying levels of maritime mishap reporting, such scenarios are not well captured by data-driven models alone, as not enough failure-data is available to make such critical decisions. AI and machine-learning algorithms, which currently rely on data-driven models to predict and act upon future scenarios, may not be sufficient then to assure safe operations and protect lives. 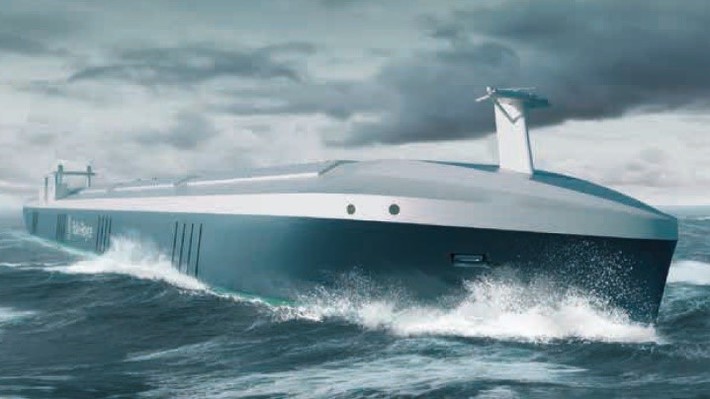 The Norwegians are seeking to combine the best of the traditional physics-based methods with the opportunities provided by novel data-driven approaches (maritime mishap reports).  Their position paper stresses that if the industry can supplement these data-driven models (better reporting) by generating physics-based casual data, it will be significantly impact current the safe implementation of AI in safety-critical systems.  Man must always meet machine and work in conjunction.