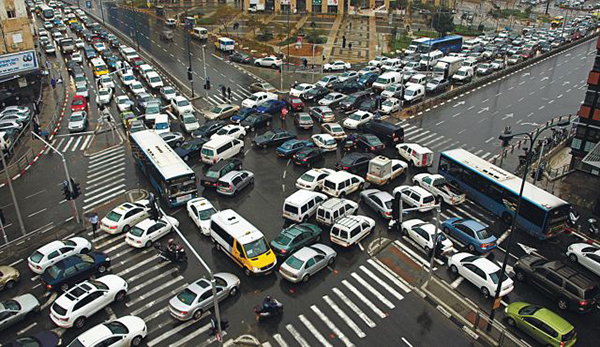 Higher education and tech companies are now seriously looking at the threat and vulnerabilities involve with the future of the automobile industry.  They are currently applying physics in a new study to simulate tactics future hackers could employ to cause chaos by randomly stranding cars and trucks. Researchers are pushing current discussion on automotive cybersecurity, which primarily focus on intrusions that could cause a traffic accident, or worse, strike a pedestrian.  This a tactic used to bring a large urban to a screeching halt.[3]

A warning is offered that even with increasingly tighter cyber defenses, the amount of data breached has skyrocketed in the last four years.  Cars and trucks are becoming more vulnerable, which is exposing the future cyber threats into a true physical danger.  There are over 30 internal “computers” on vehicles in 2019.  Ai just amplifies vulnerabilities, if left unheeded.  Current data infers it may not be difficult for state (APT), terroristic, or mischievous actors to commandeer parts of the Internet of Things (IoT), including cars and trucks.[4]

Developing simulations of hacking internet-connected cars, researchers froze traffic in Manhattan, New York City (NYC) streets.  Truth told, it would not even take total gridlock to cause chaos.  The researchers chose NYC for their simulations because a ton of data was available on that city's traffic patterns.

By randomly stalling 20 percent of automobiles during a rush hour scenario, researchers produced a total traffic halt.  Using this percentile, Manhattan was divided into “small islands,” where a driver “may” be able to drive a few blocks, but not cross town.  Thus, stranding the driver.  Now start a fire, conduct an active shooter incident or call in a medical emergency (which would remain unattended).  Not all cars or trucks on the urban streets would have to be connected; just enough for malicious actors to infect 20 percent of all cars on the road.

Georgia Tech explained by example that if 40 percent of all cars on the road were connected, hacking half that amount would achieve a hacker or terrorist’s goal.  Hacking just 10 percent of all cars at rush hour would incapacitate traffic enough to prevent emergency vehicles from expediently cutting through traffic that would be inching along city streets.  The same results would happen with a 20 percent attack even during in-between daytime traffic.  The researchers' results appear in the journal Physical Review E on 20 July 2019.[5]

A Low-level Attack on Traffic

For any urban area city to be safe, cyber-attack damage under a 20 percent level must be an evaluated goal.  A nice street grid is common in many cities, but not all.  Cities like Boston, Atlanta, and even Los Angeles have many circuitous streets which present even higher risks because a grid creates better redundancies to get to the same places, yet not grid street cities would not.

It should be noted that in this research, scientists left out factors that would likely worsen hacking damage (weather, day/night, road or building construction, populations, etc..) thus a real-world attack could produce similar results with a lower percentage of hacked cars.   This research did not include resulting factors to electronic gridlock, like: public panic or drivers and occupants who then become pedestrians and thus further block streets or cause traffic accidents.

The purpose of this recent study was to provide security experts a calculable idea of the scale of cyber-attack that would shut down an urban area.  Researchers did provide some general ideas of how to reduce urban gridlock.

Georgia Tech’s Yunker Lab, research soft matter physics which analyzes how constituent parts in this matter; connected cars, act as one whole physical occurrence.  The research team analyzed the movements of cars on streets with varying numbers of lanes, including how cars drive around stalled vehicles and found they could apply a physics approach to what is observed.

Researchers explained that whether traffic is halted or not can be explained by classic percolation theory[6] used in many different fields of physics and mathematics.  Percolation theory is often used in “materials” science to determine if a desirable quality, like a specific rigidity, will spread throughout a material to make the final product uniformly stable.  In this research scenario, stalled cars and trucks multiply to make formerly flowing streets rigid and stuck.  The blocked streets would be only those in which hacked cars have cut off all lanes or in which they have become hindrances that other cars cannot maneuver around and do not include streets where hacked cars still allow traffic flow.

It is clear that both IT and cyber professionals need to work closely with other scientific specialties to form an overall public safety picture.

[6] In statistical physics and mathematics, percolation theory describes the behavior of connected clusters in a random graph.