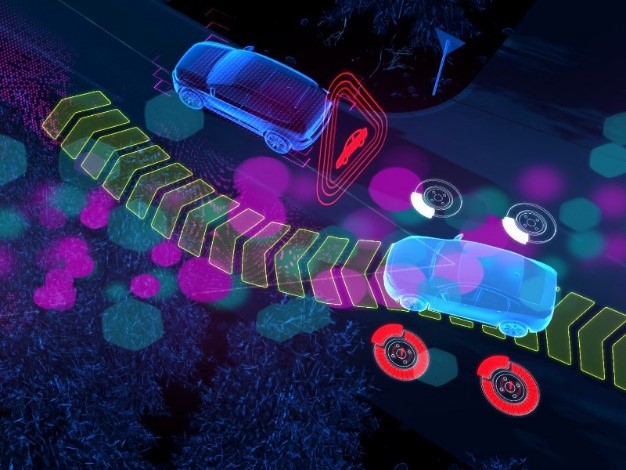 Our friends from Automotive IQ have provided the following article about future auto-driving cars.[1]  Wapack Labs believes it important to keep our membership apprised of cyber developments in the automotive industry.  Self-driving vehicles are a reality and will soon be on our highways.[2]

Imagine a world where robotaxis whisk us from place to place and groceries are ordered and delivered to our door without human intervention.  It feels so close to happening, but while autonomous and self-driving cars may appeal to our imagination, the challenges facing the technology before it becomes a widespread reality are complex and varied.  And in meeting these challenges the car and many of the systems, such as those controlling braking and steering functions, will have to undergo radical changes.  Once humans relinquish control of the vehicle to the computer, there is no longer a requirement for the traditional Human Machine Interfaces (HMIs) that have been around for over a century – there is simply no need for a steering wheel or pedals in Level 5 autonomous vehicles.  While this offers designers the opportunity to optimize cabin space and layout, it also raises significant design challenges:

X-by-Wire Already on the Road

X-by-wire systems have found their way into a few human-controlled vehicles, notably the steer-by-wire fitted to the Infiniti Q50 and Q60 starting in 2013, but they have not been widely accepted by consumers and the safety critical nature of both braking and steering systems demand redundancy which adds cost and weight.  Notwithstanding the challenges, several specialist manufacturers continue to refine and develop by-wire systems that will eventually find their way into self-driving cars.  In late 2018, Volvo Cars began conducting advanced vehicle testing using an innovative drive-by-wire technology, known as Flex-0, developed by leading test system supplier, AB Dynamics. The system enables test vehicles to be driven directly through the CAN bus, without the need for a human driver or robot.

Normally, hardware installed for an objective vehicle test would include a steering robot, pedal robots, a control system, data logger and a motion pack. Together, these can control a vehicle safely and more accurately than a human test driver – to within 20mm. This level of accuracy and repeatability is achievable due to AB Dynamics’ best-in-class course-following and speed control.

The Flex-0 also has the potential to be a key tool for testing future autonomous vehicle systems. As the industry learns more about the testing and validation requirements for such systems, there will be a need to conduct tests that safely replicate real-world environments and situations.  Another company positioning itself as a leading supplier of AV technologies, German automotive supplier Schaeffler, recently attained Space Drive drive-by-wire technology from Paravan GmbH.  According to Paravan’s homepage, Space Drive is a system that allows persons with low residual strength, minimum movement capabilities and even those without limbs to safely drive a car. The system allows the operator to activate the brake, accelerator, and steering wheel using driving aids controlled by microprocessors that transmit the signals to a servo motor for the brake and accelerator, and another for the steering, in nanoseconds.  The system, which has recorded over 500 million kilometers of accident-free driving in customer vehicles, is designed around triple redundancy and meets the ISO 26262 ASIL D standard while being manufactured according to IPC-A-600 Class 3.

If autonomous vehicles are to gain consumer confidence, they will have to be proven safe; remaining maneuverable even when signal transmission is interrupted or a subsystem fails. The challenges in development lie in creating intelligent solutions for these indispensable redundancies at an acceptable cost.

The redundancies can be created inside or outside the system:

One fail operational solution, for example, would be to add a second steering motor or a steering motor with two separate windings.  The traction motor of an electric vehicle, for example, or the brakes could also be used to steer the front wheels in a controlled manner (torque vectoring). By varying the traction or braking forces to the wheels, they could perform a steering function if required, so the vehicle would remain safely steerable.

While the common solution to redundancy is to double up on the critical components, such as Bosch’s Electric Power Steering (EPS) with its fail-operational function, these systems add complexity, cost and weight.  In an attempt to avoid these penalties several institutions are carrying out research into controlling the vehicle’s direction using differential braking.  In a 2018 research paper, titled “Steering redundancy for self-driving vehicles using differential braking,” M. Jonasson and M. Thor from Volvo Cars and The Royal Institute of Technology respectively, proposed just such a redundant system based on utilizing the braking system as a fail operational backup.

To ensure the vehicle follows the desired path after a complete loss of steering torque from the EPAS, the paper describes how, by applying brakes on the inside wheels of the vehicle, differential braking can be used to turn a vehicle in the context of providing fail-operational control for self-driving vehicles.  To investigate the concept’s potential, two vehicle models were developed with differential input. The models were used to explain and define the limits of curvature that differential braking could achieve for later validation of the results with measurements in a test vehicle.  Particular attention was given to wheel suspension effects that could significantly influence the desired trajectory. The vehicle behavior and its limitations due to wheel suspension effects were therefore meticulously defined and recorded.

Finally, a model-based controller was developed to steer the vehicle after experiencing a steering system fault, by differential braking. The controller, designed to compensate for wheel angle disturbances that would likely occur during the control event, was tested on a model with the vehicle driving straight ahead at 70kmh with induced steering failure occurring before a 200-meter road radius.  Analysis of the developed vehicle models and tests in a real world vehicle demonstrated that differential braking could be used as an alternative to front axle steering for fault-tolerant control of self-driving vehicles. There are however physical limits on the magnitude of curvature and lateral acceleration that could be achieved, compared with steering.

Can these systems deliver?

But this assumes that the braking system is functional, with its own built-in redundancy, which raises the question: Would a brake-by-wire system be able to deliver?  It seems the answer to that is quite simple – according to Bastien Russery, customer line organization manager at Chassis Brakes International: “If you have four autonomous brakes, you have natural redundancy. Should you have a defect with one, the other three are still available to stop the vehicle and can be individually modulated to keep the vehicle under control. You might not, except for the light on the instrument panel telling you there is a fault, ever realize that there is a problem.”

The company’s ‘Smart Brake’ brake-by-wire concept also eliminates the vacuum booster, hoses, clamps and hydraulic fluid, as well as the “evacuate and fill” process required to fill and bleed the system. This improves both packaging and crashworthiness, and eliminates the potential environmental hazard created by the brake fluid. In addition, brake performance and feel can be set via software, and parts can be made common across an automaker’s lineup or even between OEMs.

Furthermore, it would be possible in an emergency situation, for a vehicle with advanced driver assist systems to scan the road ahead, determine a course of action, look at the inputs from the driver, and modulate them by braking individual wheels to increase or decrease steering angle and response. Using information gained from the tires, the vehicle dynamics controller would be able to optimize each tire’s available friction using the most effective and energy-efficient means.  Smart Brake is scheduled for series production in about 2030, which would roughly coincide with the predicted uptake of electric vehicles.  If X-by-wire concepts are seen not merely as a new type of control system but in the context of the overall vehicle dynamics, with numerous technical and functional synergies, the advantages and possibilities of the technology are enormous.

What is more, as automated and autonomous driving becomes more widespread, it is highly likely that by-wire systems will significantly grow their share of the control systems market – according to research company, Markets & Markets, the drive-by-wire market is projected to grow at a CAGR of 8.86 percent from 2018 to 2025. From a market size of $19.12 billion USD in 2018, it is projected to reach $34.63 billion USD by 2025.

For manufacturers, understanding the opportunities, markets and challenges of X-by-wire technology is becoming increasingly important as electrified autonomous vehicles rollout in larger numbers.

About the Author: Peter Els

Peter Els has been involved in the automotive industry since 1979 when he joined Nissan South Africa’s product development team as an engineer. His later professional career was spent in engineering positions at OEM’s such as Daimler Chrysler, Fiat, Toyota, Nissan and Beijing Automotive Works. He’s also been technical sales and export manager at Robert Bosch South Africa, where rotating equipment and electronic control units were developed for local and international OEMs. After years in an industry driven by information gathering and communication, Peter began writing technical reports and articles on various aspects of the industry and the cars it produces. Since then he has produced a broad spectrum of automotive analysis work on technology and the automotive industry, for several publishers focusing on the automotive industry.

[2] This is not a product of Wapack Labs.