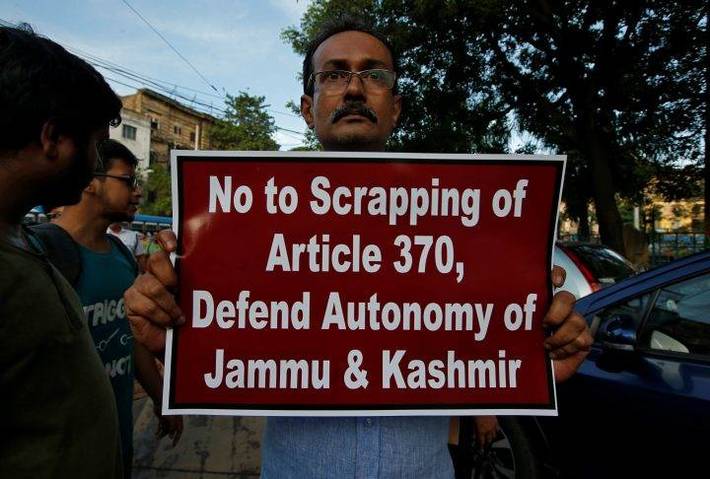 On 6 August 2019, the Government of India struck down “Article 370A and 35A” from its constitution.  Article 370 is a constitutional provision that grants special status and allows the Indian state of Jammu and Kashmir to make its own laws.  The State of Jammu and Kashmir defined these privileges to include the ability to purchase land and unmovable property, the ability to vote and contest elections, seek government employment and possess other state benefits such as higher education and health care.  With the abolishment of Article 370, non-permanent residents of the state, even if Indian citizens, were not permitted these privileges. The abolishment order was subsequently approved by the Indian President.  Jammu and Kashmir, an area of 12.5 million people that is claimed by both India and Pakistan, has long been a source of tension on both sides.

Figure 1. – Map indicating possession of state of Jammu and Kashmir

As a result of this legal action, the government of India shut down the State of Jammu and Kashmir, which includes the blockage of Highways, Telephone, Mobile and Internet.  Only Satellite Phones and Communications were permitted for the police and army officials.  Politicians were placed under house arrest and tourists were ordered to leave the disputed Kashmir.  These actions negated part of its constitution that gave the region a large degree of independence from the rest of the country.   Government is returning Internet and communication services in some regions of Kashmir valley, yet not all at once to avoid any conflicts.

Cyber-attacks on India have increased after the revocation of Article 370A.  Various institutions across India are experiencing a significant rise in cyber-attacks on their critical network infrastructure services.  The Indian IT minister stated that malicious cyber attempts were made from numerous countries: the majority including China, Pakistan and Turkey.  The “Bihar Education Society” web site, in an Indian state of Bihar, was recently hacked showing responsible connections to Pakistan and Turkey. The site was showing anti-India messages and also included a statement praising Islam.  Many social media platforms were flooded with anti-Indian posts indicating clear cyber attempts in retaliation against the Kashmir decision.  Thousands of fake accounts have been created on Facebook and Twitter from Pakistan to post fraudulent news stories; fabricating pictures, old videos and pictures showing Indian and Indian armed forces in a bad light.  Indian security forces are currently tracking these fake accounts as well as conducting geographical mapping of these activities.  After these actions in Kashmir, Pakistani social media influencers began circulating videos of Indian media to show how people of Kashmir are against the current restrictions.  After analyzing these videos, it was discovered that all the negative videos, images and news coverage being circulated by Pakistan had no link with the current situation in Kashmir.

On 5 August 2019, more than 1000 fake Twitter accounts and 1500 bots from Pakistan took over various social media sites and started a trend of anti-India posts and posts discussing India and Kashmir.  These accounts were seen sharing similar posts, on a repeated basis, which strongly indicates an organized effort.  Similar negative information tactics were observed by Pakistan during the Pulwama Attack and Balakot Airstrike (February 2019) when tension was high between India and Pakistan.  The Government of India is still working to normalize the situation in the Kashmir Valley and restore peace.   Wapack Labs is continuously monitoring the social media and sources for the current Internet blackout and troubling cyber situation in Jammu and Kashmir.